Just a few years ago, obtaining a journalist visa (J-visa) to China was a mere formality, according to Peter Kadhammar, a veteran reporter at Aftonbladet, one of the two biggest daily newspapers in Sweden. Kadhammar should know; he has been in China several times since his first there visit already in 1975.

But this year it was more complicated and time consuming to get a J-visa to China than Kadhammar has ever experienced before. Even complicated enough for Kadhammar to describe the process in an article for Aftonbladet yesterday, including the ”interrogation” he and his photographer was subject to at the Chinese embassy in Stockholm.

”What is your opinion regarding the Chinese Communist Party?”, Kadhammar was asked, perhaps not surprisingly. He avoided the question by stating how ”impressive” it is that the CCP have managed to stay in power despite the rapid development and huge changes of the Chinese society.

Similarly, on the question: ”What do you think about Gui Minhai?”, Kadhammar circumvents the topic by answering that he himself has not done any research into this particular case.

While those two questions were relatively predictable, Kadhammar was taken by surprise by the next question. Let me translate below from Kadhammar’s Swedish article:

A clerk hurries forward and scribbles down a name on a piece of paper. Jojje Olsson. The freelance journalist who has been reporting about the repression in China and the kidnapping of Gui Minhai.

So, to get a J-visa to China, a Swedish journalist now only doesn’t have to be interrogated regarding his opinions on the Chinese regime. He also has to answer questions on his opinion towards me, a single journalist whose reporting have upset the Chinese authorities.

It is of course not clear if this is also the case in other countries. Indeed, the Chinese embassy in Sweden have several times proven itself to be rather extreme, which you can read more about in my article ”Chinese Embassies are Becoming Increasingly Assertive: the Case of Sweden”.

The embassy’s ongoing intimidation of the Swedish media – including several ”press statements” condemning the reporting of certain outlets or journalists – is nevertheless surprising. Mostly because it has been extremely counterproductive.

I have seldom seen so many articles in Swedish media portraying Chinese authorities in a bad light as during this year, and a vast majority of those articles, including Kadhammar’s recent piece in Aftonbladet, are direct responses to the bullying behaviour of the Chinese ambassador Gui Congyou.

Either this continuous intimidation demonstrates the extreme clumsiness of Gui Congyou and his bureaucrats. Or it’s just evidence that they consider themselves in a strong enough position to simply ignore any criticism from Swedish media and civil society. 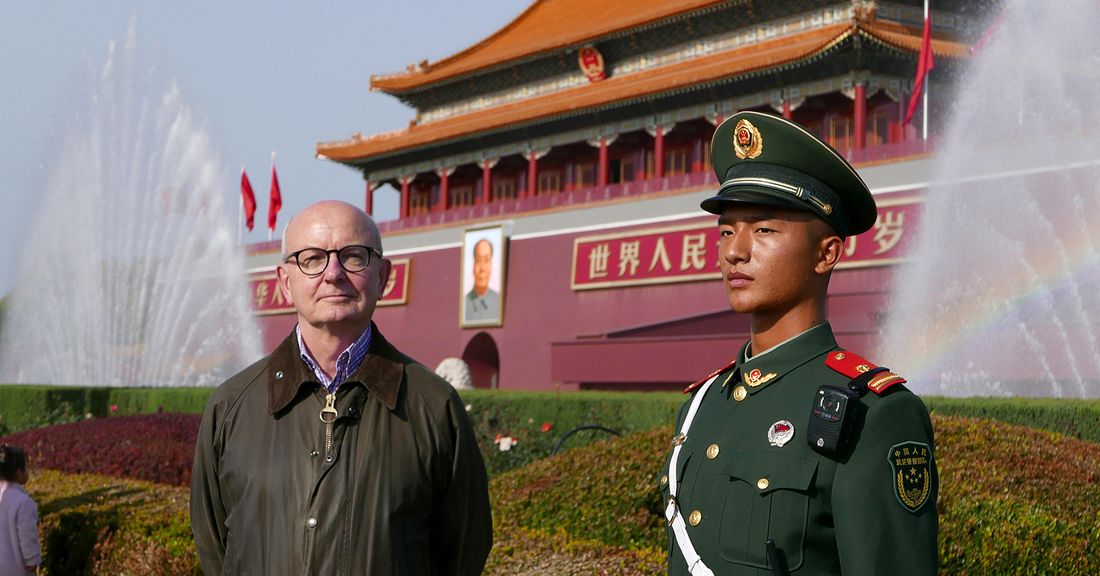 Peter Kadhammar in Beijing, where he was allowed to go only after having answered a row of questions on the Chinese embassy in Stockholm, including his opinion on my reporting.

Whatever the case, Kadhammar managed to escape the inquiry about me by saying that he never read anything I wrote. After 35 minutes of what Kadhammar calls ”interrogation”, it takes another six months before he and his photographer are granted J-visas to China that are valid for 20 days.

Just a few years ago, Kadhammar states in his article, the process to obtain a J-visa was to ”hand in your application one day, and collect your passport the next day”. Now, the process includes being cross examined by four bureaucrats in a room at the Chinese embassy.

”Every Swedish media have experienced visa problems [to China lately]. But no one has revealed this ridiculous complications and the foolish procedures because everyone is afraid to be blacklisted”, says Kadhammar.

He is absolutely correct, and I am grateful that he had the courage to do so. Most likely Kadhammar will not get a new J-visa to China anytime soon.

Simultaneously, journalists from Sweden and elsewhere will continue their tiptoeing around sensitive topics, perhaps even backstabbing their colleagues in back room meetings with Chinese bureaucrats, in order to be allowed access to the world’s biggest country, while its leadership awkwardly claims to be leading China on a path of reform and openness.